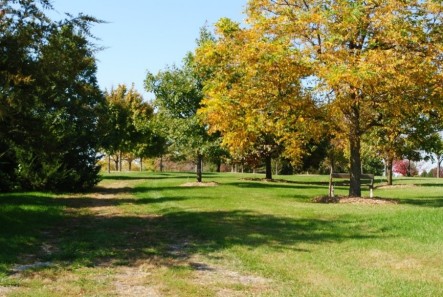 “I think that I shall never see; a poem lovely as a tree.”

This old verse is often quoted and was created by an American writer known as Joyce Kilmer. According to Wikipedia; “Joyce Kilmer (born as Alfred Joyce Kilmer; December 6, 1886 – July 30, 1918) was an American writer and poet mainly remembered for a short poem titled “Trees” (1913), which was published in the collection Trees and Other Poems in 1914.”

I love the gardens at the Arboretum and what a joy to watch visitors as they admire the diverse collection of flowers and plants we have, but the backbone of our green space is the amazing tree collection.  After all, we are the Cedar Valley Arboretum and Botanic Gardens.

A place where an extensive variety of woody plants are cultivated for scientific, educational, and ornamental purposes. [Latin arborētum, a place grown with trees, from arbor, tree.]

So many times as I wander around the grounds here and marvel at the diversity of water features, blooms, ornamental grasses, and floral displays.  I then think about the wonderful backdrop to it all – the trees! The flowering trees in the spring time, the green canopy in the summer with dappled sunshine all around, the blaze of colors in the fall, and the snow draped branches of the fir trees in the winter. For me, nothing is as serene and peaceful as a walk through tree lined pathways. 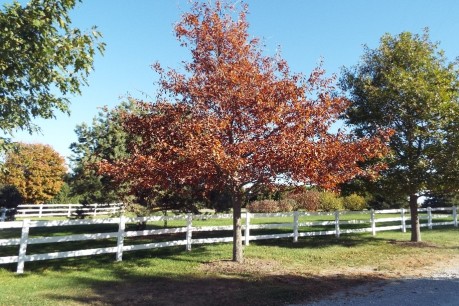 Trees are considered by many scientists to be one of the most valuable plants on earth because of their ability to produce oxygen and consume carbon dioxide. An interesting publication from Iowa State Extension quotes a book Forest and Shade Trees of Iowa by Peter J. Van Der Linden.

“Nearly 6% percent of Iowa is forested down from an estimated 12 to 20 percent at the time of settlement.

Ten thousand years ago, after the last glacier left the state, Iowa had a much cooler, moister climate. Then the landscape probably supported a spruce-fir forest. When the climate later became warmer and drier, the conifers migrated northward and were replaced by oaks, maples, and other deciduous trees. As the trend toward a warmer, drier climate continued, the deciduous trees largely gave way to heat and drought resistant prairie plants. After about four thousand years the climate changed again and was more favorable to the growth of deciduous trees.”

Most of Iowa’s pre-settlement forests were confined to stream valleys and around natural lakes. Early settlers planted groves of trees creating “forests” in places where only prairie had existed. The sesquicentennial forest at the Arboretum was planted in 1996 to reflect the varieties of trees that were planted by those early settlers.

There are presently 820 trees in our collection, not counting the Master Gardener orchard. There are 344 conifers and 476 deciduous trees.

All except 105 of these trees were planted by Arboretum volunteers beginning in 1996. Prior to that year, the space was a livestock pasture. On the far western side of the site is a small stream and along that water are 62 trees that were part of the pasture. Farther east in what is now the Shade Garden is a group of 5 Honey Locust trees that, along with another group of 5 of these trees farther east, were also original to the site. In addition, in the section of the grounds that is adjacent to Hess Road is a line of 32 Cotton Woods, which along with one other Honey Locust was there at the beginning as well.

We have about 125 different varieties of trees including 10 types of flowering crabapple, 9 types of Maple trees, and 9 types of Oak trees. We have exotic trees, ordinary trees, fancy trees, plain trees, and trees you probably didn’t know would grow in Iowa.

Our tree collection reflects the theme of ever growing; ever changing. Like all living things, trees die, and we do our best to maintain this great asset, which means that sometimes we have to remove a tree that is damaged or dead. However, I am happy to say that adding new trees to our collection has always been included in our development plans. In 2016 alone we planted 57 new trees and, thanks to generous grants from Green Scene, we continue to expand this vital part of what we are as a public garden.

Come take a walk through our forests, sit in our Shade Garden, listen to birds sing, and escape into our 35 acre oasis for a while.

Article written by our volunteer historian and arborist, Paul Kammerdiner.  To hear more from Paul, come to one of his tree hikes this season!